The criminal justice system is absolutely overflowing with cases. Every district attorney has more cases than they can possibly handle. The courts barely have the time to fit in all of the people that come before the court for judgment. The cost on society is astronomical and growing farther out of control. The prisons and jails are at maximum capacity and the numbers eligible for detention are not shrinking. The cause of such a problem is varied and widespread. The solution will not be found in legislation or the Courts. It is the reality of our justice system.

As a result, of the increasing workload, there is a benefit to those who are accused. That benefit is the plea bargain. There is not a set definition of a plea bargain, but common sense says that it will be a “bargain”. The district attorney offers the accused a benefit to get that person to admit guilt rather than to go to trial and require the district attorney to expend time and resources on that person.

In order to be a benefit, the deal extended needs to be better than the person would have received by going to trial and losing. It is the plea bargain system that has saved the criminal justice system. Without it, it would take several years to bring a person accused of a crime to justice. Simply put, the system would fail.

The benefit to a criminal defense lawyer is that the lawyer deals with so many cases, he or she knows what is a good deal for that client. Each case is unique and the outcomes can vary, however, after dealing with numerous cases, a person understands that based on those facts, “such and such” is an appropriate outcome.

Some lawyers advertise that they never settle or plea bargain as though that is a bad thing. That may be unwise. An appropriate balance of trial skills and bargaining skills make the ideal lawyer in my opinion. There are times when a person is guilty and going to trial would be foolish. Other times, taking a plea deal would be a mistake. The best lawyers know when to take a deal and when to press forward.

The most important part of your relationship with your attorney is trust. You have to know that you are in good hands. You need to know that they have your best interest at heart, not their pocketbook. Look for a good balance of trial and negotiation skills, mixed with compassion for you and your situation. 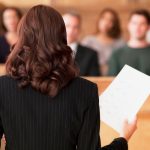